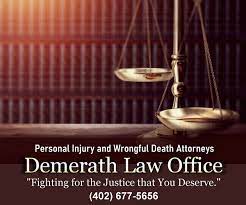 OMAHA, NEBRASKA, US, June 29, 2022 /EINPresswire.com/ -- When a person in Nebraska passes away following the accidental or intentional action of a third party, the closest relatives of the deceased person are entitled to file a wrongful death lawsuit. In the past year, many wrongful death lawsuits have failed in Nebraska courts. The Demerath Law Office has simple answers to this phenomenon and wants to spread awareness on the matter.

Lack of accurate definition of "Wrongful Death” in Nebraska:

The number one reason stated by the Demerath Law Office as to why wrongful death lawsuits fail in Nebraska is the lack of an accurate definition around it.

The Nebraska Legislature defines wrongful death as the death of a person of all ages (including a fetus) that is due to the neglect or default of a third party. This can include:

What a lot of people miss is that even if the victim had not died from the accident, he or she would still have been eligible for some serious compensation under a personal injury claim. The only difference here is that the family who brings the case to court as representatives of their deceased loved one.

The victim’s death does not mean it is too late to file a case. However, the family needs to do it in a timely manner because once the statute of limitation is missed, the wrongful death lawsuit will invariably fail.

There is a set deadline for wrongful death claims to be filed. It is time-limited by the statute of limitations. For some types of wrongful death cases in Nebraska, the filing deadline is two years from the day of the victim’s death.

Even though this two-year period may seem like quite a long time, most families get lost in the grieving process and do not want to deal with a wrongful death claim immediately. This often leads them to forget about filing their wrongful death lawsuit, and they miss the two-year deadline. If the family attempts to file their complaint after more than two years, a court will not hear their case, no matter how strong it is.

To avoid this uncomfortable situation, it is best to contact an Omaha wrongful death attorney as soon as possible. These kinds of cases can be quite complex and often time-consuming to manage and to close. There are, however, some extra filing deadlines if the death was caused by medical malpractice or product liability.

Things to know when filing a wrongful death lawsuit:

The Demerath Law Office also mentions the fact that a wrongful death lawsuit is a civil action. It is distinct from the criminal charges that can be filed by the government against the liable person or company. Why is this important to know? Because the burden of proof in civil matters is considered to be a preponderance of the evidence.

The relatives bringing the lawsuit in the name of the victim only have to demonstrate a greater likelihood than not that the accused person caused the death. While that person can be acquitted of a criminal charge, he or she can still be held civilly liable and owe damages to the deceased's estate.

After the case has been successfully filed, the applicant is still required to prove all the necessary evidentiary requirements of a wrongful death claim for compensation to be granted. Typically, the applicant must prove the following two things:

First, the court must be presented with evidence that the defendant was in breach of the duty of care owed to the deceased. In the case of a traffic accident, this means that the applicant would have to demonstrate that the accused person breached the duty to obey traffic laws and to drive responsibly.

Approaching the burden of proof the right way:

The Demerath Law Office makes a strong point around the fact that the burden of proof is not a measure of the amount of evidence the applicant is presenting. It is not about having more witnesses, more pictures or more evidence in general. It is about having more powerfully presented evidence. One credible and convincing piece of evidence that covers both the breach of duty of care and the linked causation can win the case.

“It is true that many lawsuits in Nebraska are resolved without a trial. But if those fail, another solution may be found in the form of a trial. There are even specific cases that can only be resolved by trial,” says Demerath.

Get the right legal help at the Demerath Law Office:

When it comes to wrongful death cases, things can get very messy indeed. When considering a wrongful death lawsuit in Nebraska, getting the help of an experienced Omaha wrongful death attorney can make all the difference. Demerath can explain how the law may apply to your specific situation, and make sure the case is handled smoothly and with the desired outcome. Get in touch now!