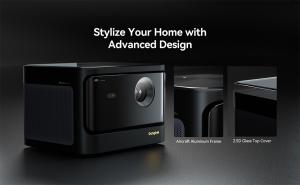 This article will introduce some tips about how to choose LCD TV, laser TV, Laser Projector.

NEW YORK, THE UNITED STATES, June 30, 2022 /EINPresswire.com/ -- Home viewing equipment is basically divided into three types, LCD TV, Laser projector and laser TV. LCD TV as a traditional home appliance, acceptance and retention is the most extensive. The latter two have developed faster in the past few years, and the reason is simple cause that the screen is big enough.

How it works
Let's talk about the principles of the three devices.
1、LCD TV
LCD TV, that is, transmissive liquid crystal display. The backlight source emits light, which is an active light emitting source that controls the orderly arrangement of liquid crystal molecules by energizing them, and then produces different colors through a color filter, which is eventually transmitted to the human eye. Liquid Crystal Display (LCD) is the English word for Liquid Crystal Display, and the common LED now refers to the use of light-emitting diodes (LED) as the backlight of the LCD TV, and does not refer to the use of light-emitting diodes as the image display TV
2、Laser Projector
The projector, currently on the market more popular projector lens is equivalent to a convex lens, the light emitted by the light source through the spherical reflector and the role of the spotting mirror focused on the projection negative, and then through the convex lens in the plane mirror to form an inverted, magnified real image, and finally by the plane mirror to change the light path, reflected to the screen. In terms of human eye viewing projection, the imaging of the projector belongs to passive luminescence.
3、Laser TV
The principle of laser TV is similar to that of projector, which is also passive light-emitting, but it is a display technology that uses laser projection to form images. The color laser display system uses red, green and blue lasers as the light source of the color laser TV, which is processed by the display system to finally display the image on the screen.

Differences
Comparing the three devices, the different imaging principles cause each device to have its own characteristics different from the others, and each has its own advantages and disadvantages in different indicators.
1、LCD TV
As the longest developed category among the three devices, LCD TV is already considered very mature as far as technology is concerned.
Among the three devices, the image quality of LCD TVs is arguably the best, and by image quality here refers to the saturation of colors, which is simply the degree of vividness. Thanks to its working principle, it is much simpler than the latter two in terms of color tuning. At the same time, the active light source directly into the human eye, does not require too high a brightness, we can see very clearly, and the viewing angle is also relatively large. However, due to the mirror design of the LCD TV, directly behind the TV, that is, behind our seats, if there is a light source, it is easy to cause reflections on the TV screen.
2、Laser Projector
In recent years the projector industry has been paying more and more attention to the differentiated development of market segments, such as the home projector, mainly in the direction of small size, multi-function, etc. as the main development. So the biggest feature of the current mainstream home projectors is that they are small and portable.
Compared to the LCD TV, the projection area of the projector, that is, we can see the image will be larger. It can reach about 100 inches, and the price is also much cheaper than the same size LCD TV.
But due to the working principle of the projector, its disadvantages are also very obvious. First, the projection distance is long, if your room is too small then it is difficult to project the size of a hundred inch screen; second, the brightness is low, generally speaking, the brightness of home projectors are in the1000-2000 lumens or so, the visual presentation in the daytime is terrible.
3、Laser TV
The biggest feature of laser TV is that the screen is large enough. Laser TV's ultra-short range projection can be achieved in about 20 cm of the position of 100 inch screen projection, about 40 cm of the position to achieve 150 inch large screen, the ordinary TV cabinet in the living room can be easily installed and placed.

Conclusion
In fact, these three types of equipment have their own advantages and disadvantages, and it cannot be said that which product is the best and which is not, but should be closely related to their own needs. The purchasing suggestions are as follows:
1、LCD TV
If you want a small screen under 70 inches, choose an LCD TV.
2、Laser Projector
If you want a portable device, then choose a projector.
3、Laser TV
If you want a large screen of more than 100 inches or even 150 inches, then you can choose a laser TV.