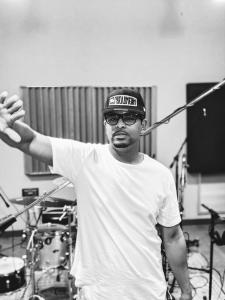 SAN ANTONIO, TEXAS, UNITED STATES, July 5, 2022 /EINPresswire.com/ -- The Entertainment Industry has taken a facelift in the way stars are made. With the Internet and radio taking the credit for the success of many celebrities across the realm of Entertainment; it is a little known secret that it’s the executives behind the scene that is responsible for molding the stars. Meet Keith George II, recognized professionally as “Youngin''. Youngin’ is an American Entertainment Executive known internationally as an Industry Gatekeeper.

With over 15 years of experience behind the scenes, Youngin operates as an A&R, Executive Producer, Brand Ambassador, Dj, and most recently, strategic advisor for the Kandiid App. As an executive, Youngin has connected the dots in many industry circles by placing both artists and executives in position to close deals on many of the records heard over the airwaves today.

Born in Upper Heyford, Oxfordshire, England, Youngin was raised as a military brat which eventually assisted his success by exposing him to different cultures and sounds. It was in San Antonio, Texas in 2006, where Youngin found his true passion in music. Equipped with a desire to be discovered, then named DJ Youngin Beats found his niche as a mixtape DJ and began networking with artists, managers, and executives. The rest is History!

From climbing the ranks amongst the nation’s hottest mixtape Djs, Youngin found himself working with the likes of Yung Berg (Hitmaka) , Statik Selektah, Stack Bundles family, SwishaHouse Records, Soso Def’s DJ Delz, Dj Decko, King Crooked and more. Youngin was quickly making a name for himself while fostering relationships with some of the biggest names in the recording industry, which led to an invitation to New York. It was in the Big Apple that Youngin began an all-inclusive internship with a Def Jam executive, working directly with Sarah Alminawi who managed the hit artist Maino under her management company MGMT Inc. Under MGMT Inc, Youngin was placed with the task of marketing Maino’s hit single “Hi Hater” which spent weeks on the Hot 100 chart, due in part of the promo campaign.

In 2012, Youngin and a colleague formed the production team known as the Block Bleedaz which consisted of producers and songwriters. By 2017, Youngin found that his path in the industry was definitely geared towards the executive end and he transitioned into talent management and promotions, which led to the formation of a local rock band in San Antonio, who later signed to a major label contract. Youngin became known as the gatekeeper for finding new and upcoming talent that led to many partnerships.

Today, Youngin continues to shape the narrative of entertainment. In addition to operating as a Director of Recruitment and Acquisitions for the Kandiid App, Youngin also serves as the Music Director for the Kandiid Konversations Podcast. To date, Youngin is directly responsible for bringing in healthy investments into the start-up through his vast network which includes his family and closest friends.

Youngin is also an ambassador for sneaker cleaning brand Snkr Glove, founded by partners Anthony Duran and Brian Averbuch, which has grown to a national brand for sneaker enthusiasts worldwide. Youngin’s vast talent of connecting the dots has opened lanes for many. In late 2021, Youngin played an integral role in producing a first of its kind FREE immersive experience combining cannabis in Denver, Colorado with partners Johnathan “JP” Peterson and Samantha “Lil Fresh Sam” Aragón; The Winter Green Cannabis Infused Light & Sound Experience which brought various cannabis dispensary owners and other vendors under one roof for networking, collaboration and raising money for children in need. In April 2022, Youngin, JP, and Bobby Jamez partnered with Alex Marley and his Fiance to attend the “Elements” event, presented by the Lova Canna Co. Dispensary which shed light on the flourishing cannabis industry. The visit also will be the catalyst for Youngin and Bobby Jamez upcoming Podcast, “Who’s More Toxic”.

In June of 2022, Youngin acquired the talents of Multi-Platinum Los Angeles based producer, De-Capo. De-Capo has worked with artists such as T-Pain, Iggy Azalea, Tedashii, A.I., EXO, and Red Velvet.

As the viability of the industry takes a facelift in the wake of the post covid19 pandemic, Keith “Youngin” George II looks to continue inspiring. With nearly two decades in the biz, Youngin has cemented his legacy in the history books, and has recently begun molding his younger brother Knick George as a young entertainment mogul.

About Kandiid App
Kandiid is a social media platform designed and created as one of the Pioneers of the social marketplace. Kandiid boasts the first of its kind, “The Klub” feature which allows users to monetize from content created. Antoine stands behind the phrase, “Your Network is Your Net Worth'', and believes everyone is a Kreator. Antoine built Kandiid on the premise of empowering everyday individuals to hold candid memories by creating albums and assessing a value to their content. Unlike many other social media apps, Kandiid operates on a “Judgement Free Zone”, which means comments are disabled to encourage true expression. The objective for Antione is simple, “Kandiid is a vehicle of content driven by the people”. The power of creativity should be in the hands of the user; therefore, Kandiid will never shadow band or censor the user's content, unless it crosses the lines of hate. Antoine Mclaughlin has the vision and passion for excellence, and Kandiid is an example of his hard work and dedication personified to push the culture forward.
Executive Producer
Byren Lloyd
byren@kandiid.com

About the Author
Lamont “Renzo” Bracy is an author, philanthropist, artist, and music publicist who works as a publicist for the stars. In addition to formally representing music artists, Renzo is an established journalist responsible for some of the interesting reads to date. Renzo is responsible for hundreds of publication placements, including serving as a contributing author for CEO weekly, huffpost, The Hype Magazine, Sho-TimeTV, and Wazzuptonight.