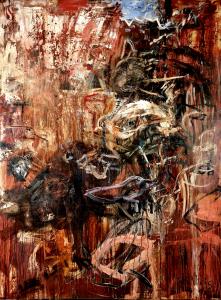 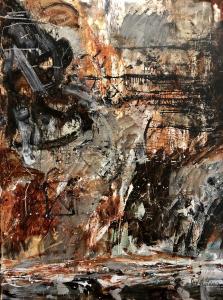 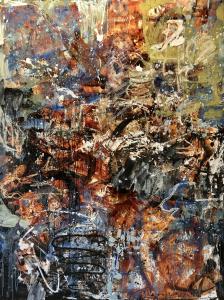 Peter Backhaus, exploring his creativity as a way for him to keep his mental health. His paintings are internal images.

I want to unite differences and spread optimism about the human psyche's ability to bring about change in the same way art has helped me to process my German history.”
— Peter Backhaus

NEW YORK, NEW YORK, USA, June 30, 2022 /EINPresswire.com/ -- Peter Backhaus has been awarded the ATIM's Top 60 Masters Award by ArtTour International Magazine. Originally from Germany, this Artist has earned world recognition for his Archetypical Expressionism art. We share with you here some insights from the artist.

"My art is uncompromising and direct. It is unique in its poetic, musical expression. The heart is its abode. It connects with the soul's longing for freedom, co-creation, and participatory commitment."

Peter Backhaus was born in 1947 in Germany. In 1968 he emigrated to Sweden, where he studied philosophy, psychology, and art. For Backhaus, painting is survival. Exploring his creativity as a way for him to keep his mental health. His paintings are internal images. They come from a level beyond time and space, beyond the personal ego, where complete stillness and chaos coexist. He calls his style Archetypical Expressionism.

What Inspires You? What connection do you have to your art?
"Well, that has differed throughout my lifetime. Between 1973, when I started art school, and 1996, my past, my strong feelings of guilt, anger, and my situation as an immigrant inspired me. Suppose that's the right word to use. Rather, an inner force, a strong need to purify myself, pushed me forward. In 1996 I had an exhibition shown in different museums throughout Sweden that I called "Unwanted lives." Photos of unwanted people, from the early days of photography in the series "The face of madness" to the racial theories of the beginning of the twentieth century to still images from Nazi-Propagandafilms and portraits from concentration camps and current ones from Swedish mental institutions.

All in all, 119 portraits of unwanted humans. Among them were photos of me, naked, exposed, humiliated in the same way those historic humans had been. There was a massive pyramid of soap in the room, a performance of me, half-naked with a whitewashed body, and automatically, uncontrolled written lyrics and chaotic sound walls from a synthesizer. I couldn't have expressed myself more openly and direct.

From that moment on, I was liberated from the past. I could feel inspiration on a different level. It was a catharsis, the end of my mourning process. Nowadays, my inspiration comes from my inner joy, from my desire to be human. But also from painting itself. Once there are a few colors or structures on the canvas, the actions quickly turn into a momentum of their own. Then I follow what unfolds by necessity. There's essentially no difference between what people call the natural world and my inner world. I'm aware that my consciousness and life experiences give me the impression of external reality, but it's always me who creates it. So for me applies: as the inner, so the outer.

In my art, I want to unite differences and spread optimism about the human psyche's ability to bring about change in the same way art has helped me to process my German history. Ok, maybe there is still some darkness in me, but I'm confident. It keeps me from drifting away into a sentimental sweetness that we can see many of these days."

What does your art aim to say?
"That's a difficult one! As I said, I work as uncontrolled and spontaneous as I can, with no plan or particular idea from the beginning. Just trying to remain in the Now as long as possible. So, from inside of me comes nothing but emptiness and life-energy without any underlying messages. On the outside it may look different, I don't know and honestly, I try not to care. Every spectator has her or his own world to associate with, her own pair of glasses that give her ideas about what she sees and what she remembers when being confronted with mountains of scratched, dripping paint. To me, it's just color and energy."

What's your most significant barrier to being an artist? How do you address it?
"This question implies that there must be barriers for an artist. I don't see it like that. For me, my life, my existence as a human being, and my expressions in the
field of art are all the same. It's a natural way of existing and without barriers. If you would ask a bird "what's your biggest barrier in singing your song?" it wouldn't understand the question. I always follow my inner joy and let me guide by my higher self, so what comes out of it is not even "Art" but traces."

What does generosity mean to you as an artist? How do you emulate this?
"Come to think of some Niel Young lyrics: 'I want to live, I want to give, I've been a miner for a heart of gold. Generosity is for me the same as creativity. Expression without censorship. All my life, I have stood on a stage to perform, offer, give, and be a raw model. Art is for me what keeps us together as humans. It's the traces left behind after an inner walk towards freedom. Generosity is the energy that makes it possible."

What's next for your creative endeavors?
"Well, I don't strive so much anymore, I just do. I am the creator of what comes out into the visible world through my hands and I appreciate and respect that. I work together with an agency in Hamburg, they will send me to different museum exhibitions in China this year, later on, they will publish a book about my life and my art, in May I participate in an exhibition in Bologna, Italy, and in October I will be part of the EuropArt Fair in Amsterdam."

Backhaus' art unites and spreads optimism regarding the human psyche's ability to bring about change in the same way art has helped him to process his German history. His work has been shown in many Swedish and German galleries and museums. Backhaus lives and works in Gothenburg and Berlin.